Do You Have A Favorite Picture

My six-year-old lunch companion’s kids-meal toy wound up being not a molded-plastic plaything but a meaningful “prize inside.” She opened her fast-food bag to find  …. a deck of cards called “Let’s Remember” — table topics or conversational prompts, as we’d call them today.

My lunch date wasn’t thrilled with the prize, but we looked at the cards and chose the question,  “Do you have a favorite picture, and if so, who or what is in it?” For me, it was the prompt of a lifetime.

Once you’ve gotten to know me, it’s likely you’ll hear me wax poetic about the tens of thousands of photos, slides and negatives I’ve digitized for image- and story-keepers across the country. I’ve saved family photo collections from ruination and loss in disasters like wildfires, smoke damage, tornadoes, landslides, flooding, and family breakups.

I often poke folks beginning their own projects with the question, “Do you have a favorite picture, and if so, who or what is in it?”

Being a memory-keeper myself, a few photo memories sing out from the batches I have digitally archived.

Decked in Halloween regalia, playful, feathered and fancied, four-, five- and six-year-olds gather for a schoolyard photo around 1926.

Bespeckled dad and daughter share a hobby grin at a film counter.

A recent candid snap of an adoptee peering through a loupe at 16mm film, reminiscing as she chooses clips from her adopted family videos to gift her birth-mom.

Theatre photos from 1910 as a group of young doctors performed an autopsy.

A surly knot of young whippersnappers squinting from the family porch in the late 1930s.

My own daughters as they slept, cavorted, grew and flew.

These and other photo memories sing out to be remembered.  But one stands out, telling a tale from a distance.

A Drugstore Photo of My Dad

I had never seen this photo until a couple of years ago. It looks to have been taken in the early 1940s. It is a wallet-sized photo of my dad that could have been carried in someone’s wallet. It is creased and well worn. I immediately put it on my scanner and saved it to the cloud. It was a treasure I did not want to lose.

My Favorite Photo: my dad, a portrait taken when he was about 12 or 13 years old. He has a baseball cap balanced on his mop of “Durfee hair.” He looks straight into the camera, and these are the eyes I am familiar with. He has a gaze that is ancient, and he doesn’t smile (Stoic is a notable feature of most pictures of my family members.)

Behind him is a painted backdrop of mountains you might choose when you are having your photo taken at a drugstore, if you were a young boy, dreaming of travelling to the mountains. You would save your money for the day when you could dress in your bomber jacket and baseball cap and have your picture taken in town. This is one of the few pictures I own that truly makes me  sentimental.

How had I never seen the photo of this shy, gentle-faced boy who dreamt of mountains?

Dad rarely talked about himself and the dreams he hadn’t accomplished. He was a man of few words. I knew he loved the mountains, but not until much later.

In 2001, I’d invited him over for coffee and to videotape a birthday greeting for my daughter, who was moving to Washington state to fulfill her own dreams. He was shy and uncomfortable in front of the camera.  I managed to capture a recording of his wish for her birthday: That she would enjoy Washington, and that she would catch a salmon, as he had always wanted to. The message was straight and to the point, in his down-to-earth way.

Tonight, I watched that 20-year-old video and remembered that day vividly: the coffee, the way the sun came in the window. I grew nostalgic and missed my dad more than I have in several years. I went outside and gazed up at the stars, and a lone bird whooped in the distance, low and lonely.

Here is one of my favorite photos, along with the birthday wish interview

So now it’s your turn. Tell me about your favorite photo.

I’ll Coax The Story Out Of You. 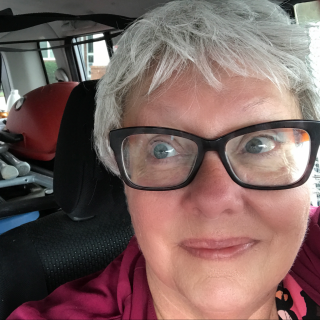